Dinner at the "Pig Stand" 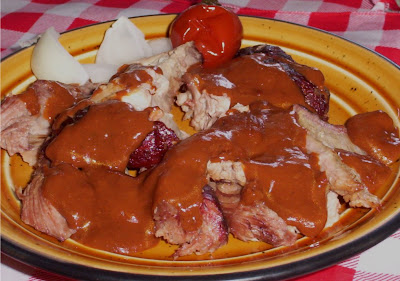 Today is a day for reminiscing. My oldest boy turned 21 today. We celebrated with a lunch out so he could be out with his friends tonight. At the last minute, he changed his restaurant choice from our favorite Mexican to Buffalo Wild Wings. "Hey, it is 40 cent wing Tuesday!" he said. There are some low carb choices there. I had a blackened chicken salad with blue cheese dressing. It was wonderful. John had wings--garlic parmesan. Definitely messy, but tasty. We were at opposite ends of the table, and I didn't hear what he was ordering. Oops. He ordered Teriyaki wings as well. He thought it was legal because I make teriyaki here at home. He forgot that this sauce is sweet. Somehow I doubt they used Splenda. Oh well, the occasional goof won't kill him. At least he got lots of physical labor accomplished today working on my "honey do" list while on vacation.

Now back to the reminiscing part...I have been pouring over baby pictures, and my guys finally got the digital photo frame they gave me for Christmas loaded. Memory lane for sure! Just last Memorial Day, my mom and I were talking about small town life before the coming of chain fast food restaurants. She said one big splurge when I was little, was take out barbecue from a place called Carl's Pig Stand. Now wouldn't the PETA bunch have a heyday with that name! Tonight's dinner was pretty much like those old pig stand meals. Some slow roasted pork from Sunday's roasting marathon, some homemade barbecue sauce and some sliced sweet onion and cherry peppers. So good...at least in this part of the world! My family were also known to be pretty big Pepsi drinkers back in the day too, so the diet version of Pepsi helps add flavor to this sauce as well.

I let the sauce simmer all afternoon after we returned home. Nobody was too hungry after that big lunch, but the meat can be reheated in the microwave and topped with sauce. What doesn't get eaten tonight will be shredded, combined with the sauce and frozen for a quick lunch another day. The sauce is sweet and thick. The ingredient list is 16 items long, but it goes together quickly and simmers unwatched, so it is easy.

Saute onions in oil until they are lightly browned. Add remaining ingredients and puree in a blender. I use my immersion blender in the same pot with the onions, so there is less to clean. Let simmer til dinner...or 30 minutes to three hours on low. If you like a spicy sweet sauce, replace half of the black pepper with cayenne.

Posted by Lisa Marshall at 7:49 PM