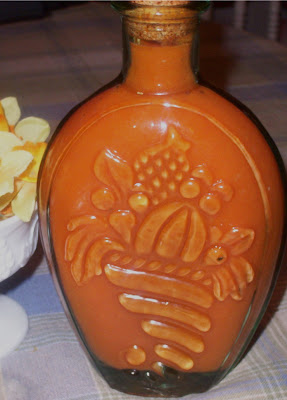 Once I was a guest in a home where the children were chastised for setting a bottled salad dressing on the table. Oh my, it was supposed to be poured into that quaint little pitcher! This was no fancy dinner party, and I was embarrassed. I certainly did not want any poor boy getting in trouble because I poured my ranch dressing directly from the Hidden Valley bottle. Granted, salad dressing pitchers are pretty, but not exactly necessary to a good family meal. Guests at my house are likely to be greeted with five or six store bought bottles. I am the one who washes the dishes, and who needs another thing to wash? Besides, you don't actually pour the leftovers back into that commercial bottle, I gather. I am far too frugal for that.

That all being said, I do love the bottle this dressing is in. I found it at Old Time Pottery for a dollar. It is now home to my homemade dressings, at least those which are thick. I have a different bottle from Dollar Tree for vinaigrettes. I made this dressing tonight in my new blender. It is similar to a Magic Bullet, but came from Macy's sale. $18.99. I sent my hubby in for a new immersion blender, but this is what the salesman gave him even though I sent the ad. The last two hand blenders I got at Walmart, both failed to work right out of the box. I would not recommend the Oster brand. After returning the second one, the clerk told us they must be junk because they got so many returned. Sad, since that is an old, reliable name, or so I thought. Wanna see my new toy? Go here. I'll keep you posted on how well I like it. Now back to the dressing...

Lise was my French name back in high school. Yes, I can still recite French poetry, thank you. I browsed the recipes online, and merged a few into this recipe--a classic French. I have another which is similar to Ott's brand French, but this is sweet, tangy and uncomplicated. I have to admit; I love sweet dressings. I tried to salvage the raspberry vinaigrette that I was making when the first machine failed to function, but it now is not so fresh. I think I will have to start over on that one. Before I do, I have to figure out what to do with the solid chunk of raspberries that thawed when my son used the bag for his cold pack for his bleeding lip. I hated to toss the bag out, so I refroze it. I'll try to figure out something. Any ideas?

With today being Father's Day, we ate out at a local diner--a colorful spot in our town filled with Route 66 memorabilia. I tried so hard to be good. I ordered a burger with blue cheese dressing and a salad in place of the fries. Unfortunately, the waitress brought me the salad, and it wasn't very good. Just lettuce and watered down ranch dressing. Guess I am spoiled when it comes to salad. Then, when she brought my burger, it had fries anyway. Have to admit, I ate them, and they tasted so good. At least the bun made it home to the puppies. I have been trying not to eat the rest of the day, doing penitence of sorts. Eating carbs always seems to make me ravenous later. I have had a couple of my Cinnamon Lover's Muffins though. They are our "Multiply Meals" brunch item for the week, and they smelled too good fresh from the oven!

If not using a blender or food processor, finely dice or grate onion. Combine remaining ingredients and mix well.

Update: This dressing is very pourable when fresh, but upon refrigeration, it tends to thicken quite a bit. Leave some time before dinner to let it sit on the counter and come to room temperature.

Email ThisBlogThis!Share to TwitterShare to FacebookShare to Pinterest
Labels: salad

Lisa, how much cider vinegar is required? BTY love your recipes.

Ooops. Left out the word cup. I edited it back in. Glad you like the recipes. It is good to hear from readers!

I was fully prepared for this to taste like a diet dressing. Boy was I wrong! This is amazing. Thank you so much for making my low carb lifestyle so much more enjoyable. I honestly think I would prefer this dressing to a full sugar one. It has so much flavor. Thanks:)

Lisa, I love your recipes! I am an Otts addict, and I'd love it if you'd post the recipe for that one as well. Thanks from Oklahoma.

How many carbs is this per serving (assuming 2 T. is a serving) ?