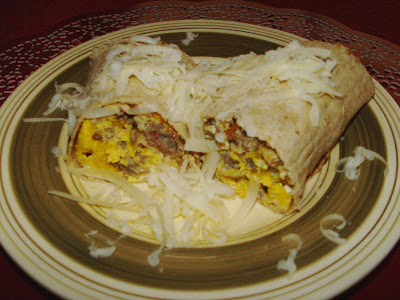 This is a favorite of my guys. We don't have them too often because we don't eat low carb tortillas too often. I have had some Lavash bread that needed to be eaten, so I threw this together for hubby. This was Saturday morning, and I needed to run, so I got a picture, but had no time to blog. I bet you know how life gets! That's when Diner food saves the day--quick and simple. Real.

I just browned some sausage and added some eggs directly to the skillet when the sausage was cooked through. That mixture goes into a low carb tortilla or Lavash bread. One trick that I have learned, is not to stir too much after I add the egg. I try to keep large chunks. Those stay put better in the tortilla. The dogs would rather I stir a lot. They love to catch the chunks that tumble out onto the floor!

This is just as good without the bread, but then that is not much of a recipe, huh? I would add salsa, but hubby is not into that. Guess he is a sausage purist. He accidentally bought hot sausage, which usually would give him a problem, but this time was good. I added some raw sharp cheddar we got at the dairy. This stuff is SO good. It is especially good for cutting back on calories. The flavor is so strong, it doesn't take much cheese to get that awesome taste.

Posted by Lisa Marshall at 6:24 PM