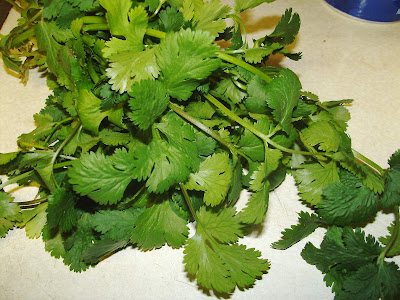 The hubby did some grocery shopping for me today since we are still fairly snowbound and he didn't want to shovel the porch for me to leave the house. He doesn't mind climbing over the mountain of snow and ice that is my front walkway. I do. Cilantro was on my list. Much as I adore my Knorr Cilantro cubes, there are times when only fresh will do. I scheduled in a couple of meals this week which call for fresh cilantro. Even with two meals coming up, I would never manage to use the whole bunch. Since the closest grocery store is not known for its produce department, the cilantro is already a bit aged. I decided to preserve it for better days.

A few month's ago, Big Lots, one of my favorite spots as a bargain hunter, had a drug store sell out. I watched this system of containers for home made baby food. Once they went on sale for 75% off, I pounced. Normally I use ice cube trays to freeze small quantities of foods, then pop them out and store them in a ziplock bag. But these little beauties come with their own lid. How cool is that? Now I can prep the cilantro and store it in the freezer like that.

Of course, I could still pop them out and place them in a bag. I will do that when I have only a few cubes left. But I have been known to forget and leave broth or green chilies uncovered a few days. Now if that happens, the freezer burn will not set in. When my boys were little, I did make a lot of my own baby foods. These would have been wonderful.

So to prep the cilantro, I just chopped it up coarsely. 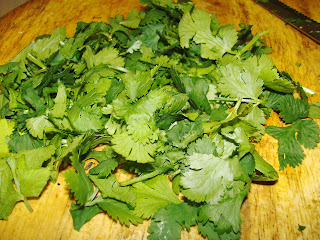 Then I packed the wells in the tray. I topped each off with some water. Added the lid, then into the freezer they went. So simple, and it saved me that amazing 50 cents worth of cilantro that would have gone bad. Hey don't tease me. Every penny counts! 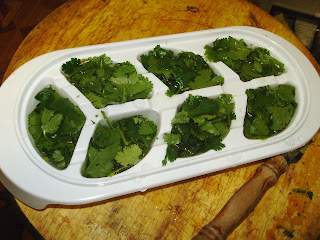 These cilantro ice cubes will be fine added to soups or steamed vegetables. To use them in a casserole or sauce, I will just thaw them in a slotted spoon or paper towel. 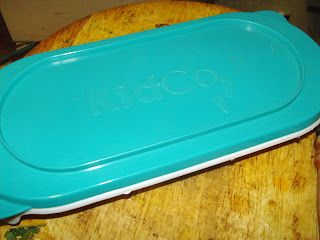 I haven't gotten too much of my prep day cooking accomplished because I have been finishing up the newsletter for February. This one is featuring international recipes. I like to add in unusual meals every now and then so we don't get bored or feel deprived. It is also a fun way to celebrate the Olympic games coming up. We always love to follow those. Here's to the fun!

Posted by Lisa Marshall at 5:46 PM