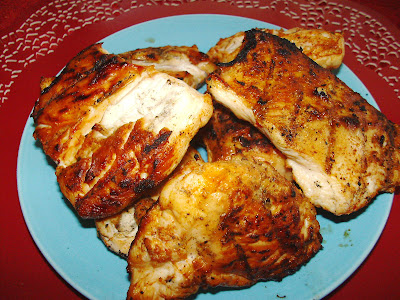 Sunday is John's only day off. He offered to grill today, since we are enjoying a break from the cold. I bought lots of chicken, and seasoned the breasts up really well for the grill. Now, I have lots of smokey, seasoned chicken for future meals. Of course, hot off the grill chicken was our lunch today too. 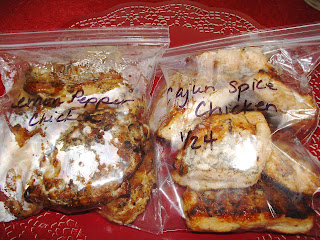 Today's flavors were Lemon Pepper and Cajun Spice. After they cooled from the grill, I added them to labeled freezer bags.Now we will be able to enjoy that smokey grill flavor on weeknights and in the snow. Great idea for simple meals later. John grilled up some beef patties too. I am not crazy about reheated hamburger patties, but he loves them. He has even been known to eat them on late night snack raids. I think he makes extras, hoping I won't have them plugged into the menu plan somewhere. As long as he is limiting his carbs, I try not to say too much. I don't want him to feel deprived, or he might sneak out for something that would really send his blood sugars up.

Posted by Lisa Marshall at 6:37 PM