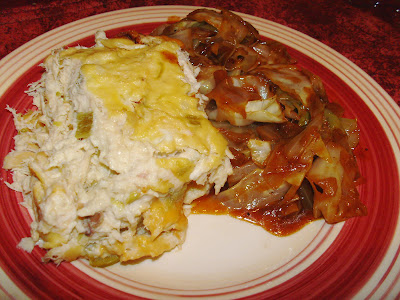 I made some crockpot stewed chicken for dinner tonight. I had planned to add one of the simple flavoring ideas I had in the newsletter. Then we had some unexpected company drop by just before dinner. Since he is a college student, not too picky, but able to eat significant quantities, I changed the plan. It was wise to extend the protein portion of this particular meal. So, I brought out the eggs and cream cheese so I could feed a crowd.

I made the Cheesy Chili Chicky recipe out of the e-book, substituting stewed chicken for chicken cubes, and cream cheese for most of the shredded cheese. All the guys liked it. Even though the casserole fit into an 8 x 8 inch pan, it filled everyone up. (Well, that and a couple of sides) Who doesn't like the marriage of green chiles and chicken? It tastes like the insides of a chicken enchilada--just minus the corn tortilla.

For our side, I sauteed some onion and cabbage. Once that was tender, I topped it with about 1/2 a cup of jarred enchilada sauce. Cabbage tastes really good this way, and the enchilada sauce is fairly low carb and lower calorie than the cheese I usually use. The rest of that jar went into some Spanish rice I made for the guys.

To make the cabbage dish, just dice some fresh cabbage, about half a head. Saute with about 1/4 of an onion in a bit of olive oil. When the cabbage is soft and the edges are browning, pour 1/2 cup enchilada sauce into the vegetables. Stir and simmer until they are soft. Salt and pepper to taste. I am thinking this would be good with some sliced black olives too, but I had none.

There you have it. Nothing extravagant. Just a simple Friday night dinner, made easier by having the chicken already stewed and shredded.

Email ThisBlogThis!Share to TwitterShare to FacebookShare to Pinterest
Labels: cabbage, chicken, side dish

Where can I find the e-book? I've looked all over your blog and can't find it.

The e-book is for sale via paypal at www.247lowcarbdiner.com