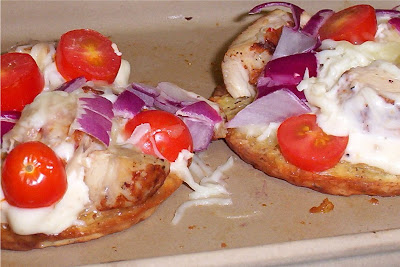 Tuscany Pizza you say--sounds gourmet. True. But the photo isn't quite my real recipe. This is John's lunch. He doesn't like all the good things that come on top of the true Tuscany Pizza that I will have later today. This one is still good too, though.

What is topping those little pizzas? His has the crust as outlined in the Triple Play recipe, one baked with cheese and egg in my muffin top pans. He has the sauce mixed with Caesar dressing. He has the veggies HE likes--red onion, mushroom and grape tomatoes. He leaves off the true Italian delights--the artichoke hearts, black olives and pepperoncini. That's okay though, because what really makes the pizza is the Italian Chicken. This is the third meal we are having from the recipe I baked up on prep day.

For the rest of the meal, he gets a salad that fits the theme. I just used the salad mix as usual, and topped it with Caesar dressing and mozzerella cheese. For dessert, he gets a leftover Vanilla Butter Nut Flax Muffin. It is only because so much of the preparation is done ahead, that he gets to have an interesting lunch like this. I do remember the days, before he had diabetes, when I would send him with a can of bean and bacon soup and a line of crackers. Was it easier? Yep. Was it good for his health? Hmm. His boss, who used to low carb, but got bored with it, has lately been coming in to check to see what John is having for lunch each day. I promise my hubby's lunches are not boring at all.