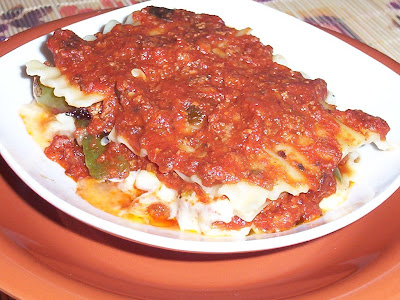 When I made lasagna a month or two back, I had two lasagna noodles left over. Since they are the hard to come by Dreamfield's variety, I saved them. Tonight's menu called for a meal made from my Turkey Red Sauce. I usually serve that over sauteed vegetables, but tonight I decided to add those lonely noodles. After all, Christian was finishing up some spaghetti noodles too, so the hot water was already waiting.

First, I boiled the noodles while sauteing the veggies. I love lots of green peppers with this sauce, but I also threw in a couple handfuls of coleslaw mix. No need to chop and dice the day away. When those were done, I simply pulled them from the boiling water and set them aside. In went those evil carby noodles. (Have not yet convinced this boy that cabbage is a good substitute for spaghetti) While they were boiling away, I made these awesome little lasagna stacks. I just plopped about a third of a noodle in the base of a dish. Then I added a slice of cheese to hold it steady while cutting. Then on with a layer of Turkey Red Sauce. Added to that, a spoonful or two of vegetables. Then I just repeated layers until the noodle was gone, and made the next lasagna stack the same way. They are very good, and take no oven time! 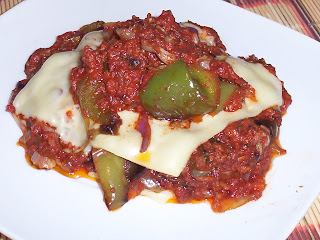 I had sauce left over, so I made a stack without the noodle too. That is closer to the way we would generally be eating, since Dreamfields is more for special occasions for us. The layers are the same, minus the pasta. Cheese, sauce and veggies. It is pretty rich, but very tasty. Just add a green salad and you are set to go. Because the Turkey Red Sauce is slow cooked before going in the freezer, this meal doesn't taste quick at all! It has the savory goodness of an Italian grandmother! Because I don't happen to have one of those, this is a fantastic substitute.