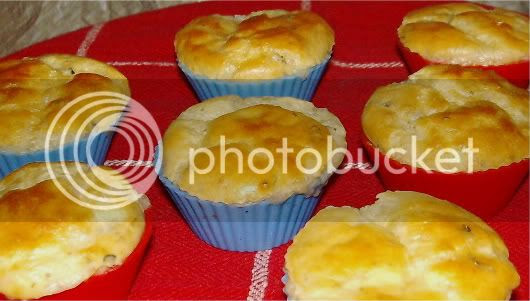 We had roast and root veggies for dinner tonight. The roasts were inexpensive last week. Good thing, it was quite fatty. I added some veggies to the crockpot to serve alongside. I added one potato for my carby boy. I thought leaving the red skin on would make it simple to tell which veggie was which at the end. I added a rutabaga, onion, and a package of radishes as well. It was still hard to pull the potatoes out without plopping them on my plate. Potatoes are one of those foods I miss. The radishes just didn't do it for me. Edible, but that is about all.

I did make some lovely cheese and herb popovers, for lack of a better term. No these aren't exactly popovers, but they were nice as a dinner roll substitute, and very easy to put together. Because I am experimenting with the Master Mix (recipe in the previous blog entry), I wanted to just play in the kitchen with no recipe at all. After eye-balling the batter, I baked them in mini muffin cups. They rose nicely and had a fluffy texture. Wish the roast had turned out as well.

You could play around with the cheese and herb combination. I couldn't taste the coconut or the egg at all. By using protein powder in the mix, you don't have to use as many eggs as you need with coconut flour alone. Jack cheese was very mild. I think it would be awesome to add some really flavorful cheese, such as feta, as well. Just a tablespoon or two, not to replace the Jack or Cheddar.

I think I might try a batch in a regular muffin tin. The bigger popovers just might make excellent mini buns for burgers or sandwiches. That would be fun in my Bento lunches. Oh the possibilities.

Mix all ingredients together. Spoon into greased mini muffin cups and bake at 400 until puffed and golden brown.

Simple, so simple. Especially when the master mix is already waiting. Just another idea to get us through the dinner rush without reaching for the Wonder bread.

Posted by Lisa Marshall at 8:55 PM

Email ThisBlogThis!Share to TwitterShare to FacebookShare to Pinterest
Labels: breads

Lynne,
That is a tough question. I use Aloha Nu coconut flour. There is some controversy on their carb counts. As I understand it, the measurements on the nutritional info are a bit whacky. The package says 28 grams equals 2 tablespoons. They claim a carb count of 16.6 carbs with 10.5 g of fiber. That is approx. 6 carbs per 2 tablespoons. That measurement makes the master mix come in at 38.6 net carbs per batch. One batch measures out to be just over 1 2/3 cups.

However, several on Low Carb friends have repeatedly measured 28 grams of Aloha Nu. It comes out to 1/3 cup. That is quite a difference. If I use this measurement and count, I get 18.2 net carbs per batch.

Confusing? Yes. Also, you need to take into account the brand of whey protein. I am using one from GNC with 2 carbs per 1/3 cup.

I am having computer issues, and had to remove Mastercook from my computer until we get the problem fixed. When I get that reinstalled, I will try to work up the carb count for the popovers.

what is coconut master mix ?