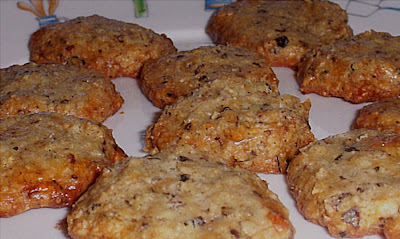 Today has been nice. I have had plenty of time at home to experiment with some recipes. The big winner as far as my husband is concerned, is a new cookie. But first, my list of accomplishments for the prep day. Our Triple Play Meal for the week is Tequila Lime Chicken. Tonight's dinner was hot off the grill. Later in the week, I will make a Tex Mex Salad and White Texican Pizza. For a Freezer Favorite, it was a Dump week, so I made some Teriyaki Steak Dump meals. Those will make a quick meal next Saturday and in weeks to come. Instead of muffins this week, I made some nut granola to go with homemade yogurt, and some instant breakfast cereal to use like oatmeal packets. Our Multiple Meals brunch recipe for the week is a take off of the standard ham and egg quiche recipes. I will blog about that one later because it was sooo good. I'll have the recipe too, since it is not in the e-book.

Despite putting those meals together, I decided to experiment with some baked goods. I recently got an order in from Nutty Guys, and have lots of nut meals to try out. The almond meal has already been successful in several recipes, but I had not yet tried the walnut meal. It was a coarser grind, and I was not sure how it would behave in recipes. I tried it because it is much less expensive than blanched almond flour. At only 2 dollars a pound, I decided to do some culinary testing. My first attempt was to use it in place of the almond flour in Almond Thins. This worked pretty well. The egg white held it together, although I could never get it quite as thin. The crackers had a slightly bitter flavor, however, and I probably won't use only walnut meal again--maybe half and half.

My second recipe attempt was a mixed bag. I found a recipe on the low carb friends board for Almond cookies. The first half of the batch did not work at all. The coarser meal left the cookies too crumbly to pick up. They tasted wonderful, but fell apart on the cookie sheet. To remedy that problem, I added an egg. The result was fantastic. Wonderful little nut bites with a delicate flavor that everyone loved. Glad I got a photo because they disappeared quickly. I named the recipe to make fun of the fact that I started recipe testing on a prep day for the week. Enough time in the kitchen already!

Soften butter and add remaining ingredients. Drop by teaspoons onto parchment paper. Flatten slightly and shape edges with your fingers. Bake at 325 degrees for about 10-15 minutes or until lightly browned and edges are set.

Posted by Lisa Marshall at 9:48 PM

I want your granola recipe!

Instead of chopping the pecans myself, I used the walnut meal from Nutty Guys.

Oh, my, Lisa. These look wonderful! I'll be trying these SOON!

these are yummy! sweetened using 1/2c of erythritol and a few drops of sweetzfree. delicious!

I would need to know the carb count please. As a newly diagnosed diabetic, it's imperative for me to count each carb.. Thank you so much..