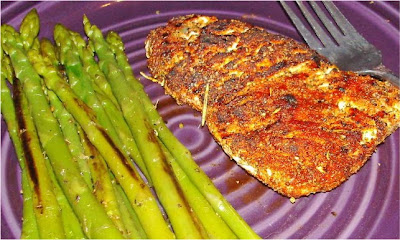 Instead of getting out my "George" grill tonight, I heat up a skillet--really hot! Blackened chicken and fish require a hot pan and a quick cook. Just a bit and a Cajun meal is on the table. First, I pound the chicken breast thin. This is a pretty important step so the meat will cook evenly. Then use a Cajun seasoning blend to flavor the meat. I used the one from my August newsletter.

I sprinkled the seasoning in the base of a small bowl. I also added a bit more paprika. Then press the chicken into the spices and pat them in by hand. Do the same for the other side of the meat. Heat up a cast iron skillet on high. Once it is very hot, put the chicken in, being careful not to let the chicken pieces overlap. Mine didn't smoke much, but if yours does, have a lid handy. Cook about 4 minutes on one side and two on the other.

I added some Tabasco Garlic and Pepper Sauce. Nice and spicy. For a side, I took advantage of the hot skillet to grill some frozen asparagus spears. After searing them for a minute, I added some water to the skillet and let them steam fry until tender.

This chicken is great in a blackened chicken salad too. Just add some shredded cheese and banana peppers to the salad greens. Blue Cheese dressing is my favorite, but since I am cutting calories right now, I will give up the cheeses and use a bit of vinegar mixed with hot wing sauce instead. Whether for dinner or in a salad, this is a simple E.Z. Fix meal.

Posted by Lisa Marshall at 6:26 PM

Oh, when I first saw the photo, my mouth watered for that asparagus! I was surprised to read they were frozen. Wow, they look beautiful and fresh. Gotta try that searing in a pan then add water and cook. Yum. :-)
Thanks,
Loretta
=^..^=

I got these at Aldi. They were very good and reasonably priced too.