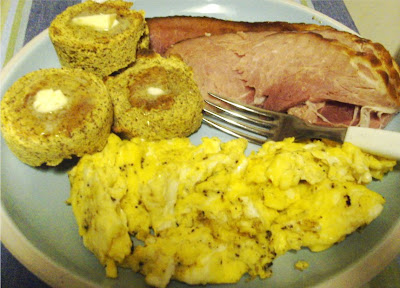 We don't do it much anymore, but when the boys were young, we often made breakfast for dinner on Fridays. Sometimes John would even drag out the waffle maker. Good memories. Today, I had to figure out what to do with our Christmas ham. No it is not old and moldy, we got a gift certificate for one, and already had one at Christmas time. So now it is an almost spring ham. Actually our coupon was only good through February.

Since Fridays are my busiest teaching day, I like things simple if possible. Tonight the guys had the ham paired with scrambled eggs. To replace the bread for the hubby, I made a Vanilla Nut Minute Muffin. I used coconut flour tonight. If you do that, add a bit more water to make the batter less dense. After it was microwaved, I cut it in thirds and toasted it so the edges were crispy. Just a touch of butter--no sweetener needed because the muffin is already sweet. Christian preferred a bagel and cheese. To each his own.

This is going to be our Triple Play meal for the week. The ham is so big, I will also use it to make some Multiply Meals of Ham and Vegetables au gratin. Word to the wise. Watch the carbs on the ham labels. They usually are processed with some sugars. If in doubt, make sure to use the lowest carb side dishes as possible.

Posted by Lisa Marshall at 7:05 PM