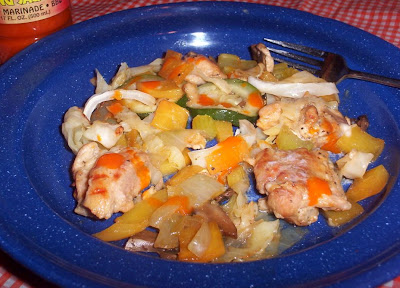 It's Friday Night buffet night at the Marshall house. Tonight, we are going back to an old camping favorite--Hobo Dinners. They are actually foil pouches filled with meat and veggies. We aren't baking ours over a campfire, although you can. Tonight it is a cold rain, so I am glad to have my oven warming up the kitchen.

My Eagle Scout son (actually I have 2 Eagle Scouts, proud Mama that I am) helped me wrap them up tight before I popped them in the oven. The great thing about this recipe--or "method" as is popular to say these days--is that everyone gets to assemble his own foil packet according to his tastes. Our Hobo Dinners tonight started with a base of chicken thighs. Other popular choices include lean ground beef or link sausages.

The assortment of veggies I had to choose from tonight looked like this:

We had a choice of seasonings too:

I really like the rutabaga in Hobo Dinners because the texture is so similar to that of potatoes. Carbs are higher than some other vegetables, with one cup having about 8 net carbs, but the taste is worth it. We seldom have a full cup per person, but even if we did, these are the veggie carbs I would rather have than those coming from bread or pasta. After the pouches have baked for about half a hour, we unwrap them. I like to add a pat of butter if I have used a lower fat meat. I also like to offer a sprinkle of cheese, some hot wing sauce or a splash of soy sauce. 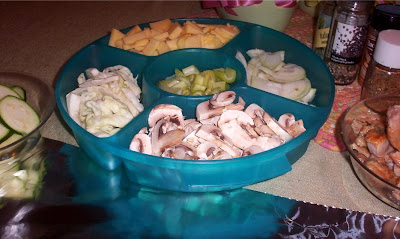 Another trick I have when I make this fun meal, is to use the leftovers for soup. After everyone has assembled his foil dinner, I add all the other chopped veggies into a pot of stock. Add some meat, seasoning and a can of tomatoes, and I have a nice pot of vegetable soup for tomorrow's lunch. How could it get any easier?

Posted by Lisa Marshall at 6:53 PM

Email ThisBlogThis!Share to TwitterShare to FacebookShare to Pinterest
Labels: casserole

Oh, I love that idea! I will have to add that to my menu next month.