It Must Be Christmas Cake Balls 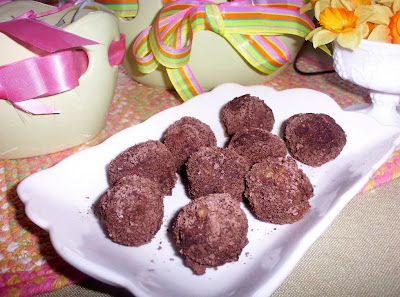 This is the kind of recipe I do at Christmas time, when that wave of Martha Stewart madness sweeps over me. Actually, it was really an act of desperation for me to be making these treats for no special occasion. I like to be in and out of the kitchen as fast as possible. I do like treats, but this? Once or twice a year is enough. Oh, it started innocently enough. I saw a post on my diabetic forum about a yellow cake made with coconut flour. It sounded good, and I had all the ingredients. Little did I know how many ingredients I would end up needing...

The cake went together just fine. No problem. I chatted with my friend NeeCee about ways to frost it. I was unfortunately out of butter. After I was back in the kitchen, I decided on an old fashioned jello poke cake. Hmm. Only lime jello. That just didn't appeal to me. New idea. How about a poke cake using chocolate. Yes! So, I poked the cake using our camping hot dog grillers. Worked great. Found a recipe online for chocolate ganache that could also be thinned into a sauce. That would work. So I made a wonderful sugarfree ganache. Very yummy. I thinned it and poured it over the cake. It looked divine. I even made some extra pokes to get that liquid chocolate deep into the cake. Then, I topped it with the ganache that was setting up quickly. I was all ready to take a photo and brag about it here on my blog. It was a beauty.

Then, I decided to taste it. Eeuuw. I choked down a piece, but to me it tasted more like a cardboard egg than a moist pound cake. Even the chocolate couldn't save it for me. What to do? All those ingredients were far too costly to toss in the trash. Besides, my trash was overflowing already.

I fretted for a while, then decided to be resourceful. I could make a trifle. No, that might be more expensive ingredients wasted. Besides, we could never eat an entire trifle by ourselves. Then it came to me. My cake balls that I make at Christmas time. Yes, those would be perfect. They are a natural to put in the fridge or freezer and pull out one at a time for a decadent little treat. It seemed a natural move. Afterall, a recipe that has you bake a cake only to crumble it up and mash it into a glob along with its frosting must have been a mistake to start with, right?

So I plowed ahead. The cake was already frosted, but I knew that would not be enough moisture, and I needed to really hide the eggy taste. I decided banana flavoring would blend nicely. So, I pulled out my last cream cheese, added a teaspoon of flavoring and 3/4 cup of sweetener. After blending that together, I served up half the cake, and started squishing it all together. Unless you have tactile issues, just squish it all between your fingers. After a taste test, I decided it was a winner. So, one batch made about four dozen cake balls. If you want, you could dip them in melted chocolate, but today, I was just too tired, especially since my clan was still waiting on dinner. I rolled them in a mixture of cocoa powder and granular Splenda.

I guess that these cake balls are not too much work if you consider the potential for snacking, light desserts and brown bags. 48 little cake balls will help with portion control, and will add a special touch at the end of an everyday meal. I will still think it is Christmas, though.

The cake recipe was adapted from the Bernstein Recipe Board. I used two fewer eggs than the original recipe because others had complained the cake was too dense and eggy. Hmm. Some liked it just the way it was written, so you can try it and judge for yourself.

Blend together butter, coconut milk or cream, eggs, sweetener, salt, and vanilla. Combine coconut flour with baking powder and beat into batter until there are no lumps. Pour batter into greased 9 x 9 pan or, if you want a two-layer cake, use two 8 or 9 inch round layer cake pans. Bake at 350 F for 35 to 40 minutes for the square cake or 30 to 35 for the layers, or until a toothpick comes out clean. Cool and remove from pans.

For the Ganache, go here to Laura Dolson's recipe: http://lowcarbdiets.about.com/od/desserts/r/ganache.htm
I cut this recipe in half.

Since I need a holiday for these, I took the photo by my Easter decorations. I suppose the cake balls would be good in an Easter Basket too.

Posted by Lisa Marshall at 6:39 PM

Coconut flour is crazy stuff, the way it sucks up all those eggs. I still use it, but I use it a lot more sparingly than I used to. Sorry the cake itself wasn't to your liking but sounds like you made a great save! Love those kinds of stories!