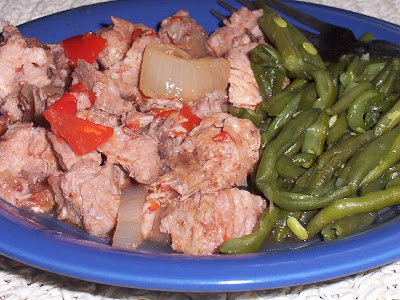 My youngest son hates Chinese food. When we used to go to Chinese Buffets, we would try to leave him somewhere else, because he never ate enough to pay that buffet price! He will eat this, though. It is a very mild sweet and sour crock pot recipe that I have had for years. The original is in the Rival Slow Cooker instruction book. My version is in the e-book.

This week, it was pork ribs that were affordable rather than pork steak, so I substituted. That worked out fine, I just put them in whole, then used my kitchen shears to dice the meat right in the crock pot, removing the bones as I went. That is actually easier than slicing the raw pork steak. Either way will work, though.

The "recipe" for the green beans is flavorful and so simple it really doesn't qualify as a recipe. Just steam or boil frozen green beans to your preference. Drain any cooking fluids. Then add a touch of sesame oil. I used about a half teaspoon for enough beans to serve six. True sesame lovers will want more, but I have that anti-Chinese food boy I have to think about. I absolutely refuse to fix more than one main meal just because we eat different levels of carbs. For this meal, I made a pot of rice to serve the Cantonese Dinner over. Ours, we just ate plain. My crockpot always gets a workout in August. What better way to keep the kitchen cool?

Posted by Lisa Marshall at 6:50 PM

Email ThisBlogThis!Share to TwitterShare to FacebookShare to Pinterest
Labels: crockpot, pork, side dish