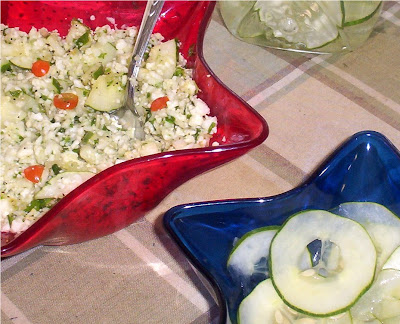 When it is hot hot hot, what is better than a cool cool cucumber? My sweet mom brought me the only cucumber her garden produced so far this year, which just happened to be hiding behind another vine. Neither one of us seems to be getting a bumper crop this year. I really wanted to honor this cuke since it is the only one to offer itself up this year. Normally, I am not a huge cucumber fan. I try, I really do. I know how low calorie they are and all. I should love them. Instead I generally just tolerate cucumbers. Unless, that is, they get to play around with other ingredients I am more passionate over. That is what I tried to do today. I made these recipes in between mourning the absence of my eldest son, and being all glum about the all too soon departure of my number two boy. Well, that and doing some prep cooking too.

I have a Triple Play meal of pork roast in the crockpot, so I played around with this cucumber while it was still at the peak of freshness. I have to admit, I like these recipes better than a plain cucumber added to salad. 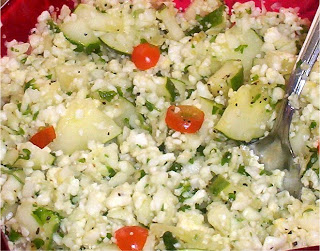 The first dish I made was a low carb take on Tabouli. My family once owned a barbecue restaurant, and we made gallons of this stuff. I grew to love it, and still demand it on major holidays. None of my men will eat it however, so I chose to make just a teeny tiny batch. Of course, I have had to modify that old recipe quite a bit to make it low carb. I used cauliflower as the base ingredient rather than bulgar wheat. Not quite as good, but still a tangy taste sensation. This is one of those recipes that you can add or subtract ingredients to your liking. I would like some green bell pepper in this too, but didn't add any today. The tomatoes and parsley were homegrown. Yum.

Use a food processor to grate the fresh cauliflower. When it is nearly done, throw in the parsley for a quick chop. I used my old manual salsa maker. Chop the remaining vegetables by hand into bite sized chunks. Mix dressing ingredients and pour over chopped vegetables. Add a sprinkle of lemon pepper and let the salad chill for several hours. Taste before serving and adjust the seasonings to your liking. 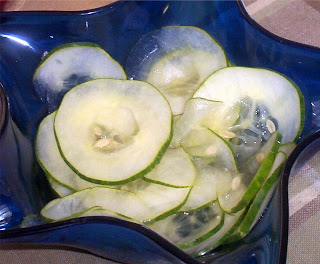 The next side dish I tried was Sweet and Sour Cucumbers. I read about that on one of the low carb boards a while back. Sorry, I didn't use an exact recipe. Just mix sweetener and vinegar on a one to one ratio. Pour that over the thinly sliced cucumbers and let them marinate for an hour or more. These make a very tangy yet cool side dish for spicier foods. I really like cucumbers this way. They might even find their way into my lunch box now. Today I used Truvia sweetener. I have never tried it before, but had a coupon from the paper. I like it well enough, but it is probably too costly for me to use all the time. I often use liquid sucralose, but it is very concentrated. Today, I wanted to sprinkle a bit of the sweetener over the cucumbers slices. I was able to do that with the Truvia because it is bulky. I then mixed the rest with the vinegar to pour over the slices. It worked well, but I have decided the sprinkling step is not necessary. This will work with whichever sweetener you choose. Just remember the 1:1 means the sweetener's equivalent to sugar, not an actual measurement. 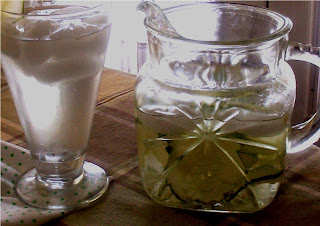 Lastly, on my mom's request, I tried some Cucumber Water. My niece recently served this at a shower she was hosting. It is a pretty, refreshing spa type drink. It does perk up the water a bit. Not being a cucumber devotee, it will probably never be a favorite for me. Although I prefer my Lemon Balm Tea, this is easier! Just slice some cucumber and add it to some filtered water. Some add fresh lemon as well, but I don't have any lemon trees here in Oklahoma. I just made about three servings in the antique glass pitcher that was my great grandmothers. It is very pretty, but not typical Diner food. The guys in the house gave me funny looks and kept walking. Kool-aid is definitely more their style, sorry to say. Being the only female, I think it is nice. Some say it gets better when it sits overnight.

Now I am off to make some muffins. They will be good to take on the road as we head back to college tomorrow.

Posted by Lisa Marshall at 4:48 PM

Email ThisBlogThis!Share to TwitterShare to FacebookShare to Pinterest
Labels: beverages, salad, side dish