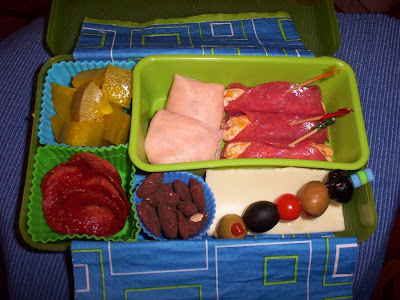 Tonight we had Lebanese Dinner from the crockpot. Even though it tasted yummy, it wasn't that pretty. I took a frugal little shortcut and used some slaw mix that was in its last days instead of chunks of cabbage. It still tasted like a cabbage roll, but the slaw just kind of got lost among the turkey and sausage.

So, I thought I would show you the bento lunch I just packed for tomorrow instead. It is filled with deli items. I had some cheese balls still in the freezer, so I defrosted a couple of those. I used them as filling for some mini roll-ups using salami slices. The little pillows are turkey slices filled with the cheeseball and wrapped up like a little package. I threw in some diced dill spears, pepperoni chips, some cocoa roasted almonds, and an olive/cherry tomato kabob on a cheese slice.

That is a regular skewer that I decorated for the kabob. I have made quite a few for my bento meals. They are so fun to make. This one is decorated on the end with some craft foam beads I found on sale. Most pony beads also fit. We even found some old wooden beads back in the craft closet. The great thing is that these don't need any glue, so it is easy to remove them from the skewer after each use. That way, I can start with a fresh clean skewer each time and not have to try to wash them. I also found a new silicon divider at Old Time Pottery. It was a perfect fit and the best color match for my green pencil box bento. I don't do all this cutesy stuff for my guys, but hey, a girl needs a creative outlet from time to time.

Posted by Lisa Marshall at 9:30 PM

Thanks. My creative outlets aren't nearly as wonderful as your, though!
Lisa