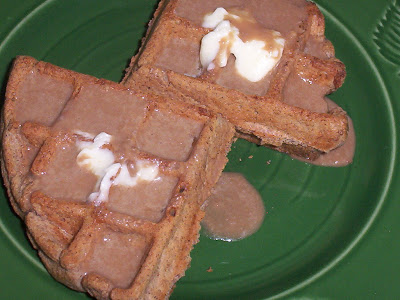 A friend sent over a low carb cookbook this weekend...one I had never heard of. Cookbook junkie that I am, I decided this morning to try a recipe or two. Little did I know that decision would end up taking a good portion of my day! After church, we ran to the store looking for a specialty ingredient--psyllium husks. I have never worked with those before, but I headed to the drug aisles to find out more. The only ones I could find that were not laden with sugar, had other flavors added. That wouldn't work. Then I managed to find one container--but I was not about to pay nearly thirteen dollars for less than one pound of this magical ingredient. Those with sugar added were about half that amount. So on with the substitutions.

I opted to try substituting flaxmeal for the psyllium in a waffle recipe. I'm not sure how well that worked, because the batter was so thin. I tried a bit, and it turned out very light and far too fragile to pull out of the iron. Then I began adding more dry ingredients to try to thicken the batter. After a few attempts, I finally struck upon a recipe that works. In fact, it would be great for breakfasts for two, and is fast because you can make it in a bullet blender.

The waffle is slightly sweet and would be tasty with just a fruit topping and a touch of whipped cream. I decided to try the maple syrup recipe in the cookbook too. That ended up needing some alterations too.

Blend well and pour into a heated, well-oiled waffle iron. Cook until the steaming stops.

I used a belgian style waffle iron. This made one full waffle. Your iron may be different. I made the maple syrup too, and now I am definitely at my limit for sweet!
Be sure to serve this breakfast with a side of bacon or sausage. The salt is needed unless you have a major sweet tooth.

Bring water to a boil. Dissolve gelatin in the hot water. Add remaining ingredients and chill several hours. If you want to eat it sooner, blend xanthan gum until it is incorporated with no lumps. Let cool.

Also the original recipe was too sweet for me, so I added a bit more water as well and increased the gelatin. I wanted to try it sooner, so I went ahead and added the xanthan gum.

Come to think about it, perhaps low carb ingredients have changed with the fashions. I have never purchased some of the ingredients which were listed in nearly every recipe in this dessert cookbook. Today, we tend to use less soy, and some ingredients have been swapped for easier choices. Since this book was published in 2003, perhaps it just needs an update. Still, it is always fun to see what another creative cook has been up to!

Posted by Lisa Marshall at 6:06 PM

Email ThisBlogThis!Share to TwitterShare to FacebookShare to Pinterest
Labels: breakfast