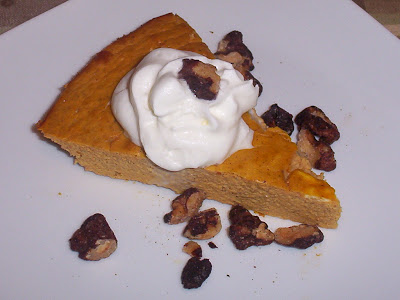 So glad it is officially Fall. This is my absolute favorite time of year--especially good after the hot Oklahoma summer. Although I hear there may be a shortage of pumpkin this year, I just made my first cinnamon spiced pumpkin confection of the season. This bake is not an original recipe, I borrowed it from Linda, here. It is not too spicy, not too eggy (despite the five eggs). Alone, this can be used for breakfast, as it will later in the week for us. But tonight, it is dessert, topped with whipped cream and spiced walnuts. The nuts really stand out in this dish. Try some.

The recipe I used tonight, worked pretty well, but could be a little sweeter in my opinion. Still, the roasted nut flavor is delicious. Maybe I am so accustomed to sucralose that Truvia doesn't taste sweet enough to me.

Whip egg white until frothy. Add 4 packets of Truvia and cinnamon and mix well. Coat nuts with this mixture and spread onto a non stick baking sheet or parchment paper. Bake in a 350 degree oven for about 20 minutes, stirring every five minutes. Remove nuts from oven and sprinkle the remaining sweetener packet over the nuts.

I baked these nuts on a lower rack in the oven because the pumpkin bake and a meatloaf were already baking away on the upper rack. Mine did get a little too brown. Watch out, it happens quickly! These are good as snacks, in granola, or as garnish for desserts.

Now about that pumpkin shortage--my plant is just now blooming. I somehow doubt that mine will be producing before the first frost! I am betting there will still be some bargain pumpkins around come early November. That is when I buy the Halloween leftovers and process them for the freezer. They are not as sweet as the smaller pumpkins meant just for pie, but they are still good in Punkin Chili and soups.

Posted by Lisa Marshall at 8:56 PM

Well you beat me to this... I made the pumpkin bake a couple weeks ago for the first time with this EXACT plan. I am going to post a similar article around Thanksgiving time. I really liked the bake straight from the casserole dish. I was also thinking about making an almond meal crust like I have done with regular cheesecake... these pics have made me want to go to the store to get more ingredients!

Yes, whether it is hot or not tomorrow, I am firing up my oven and making this delicious looking pumpkin bake! And I even have the walnuts, so I am going to try that, too.

Thank you for such good and nutritious ideas!
Loretta