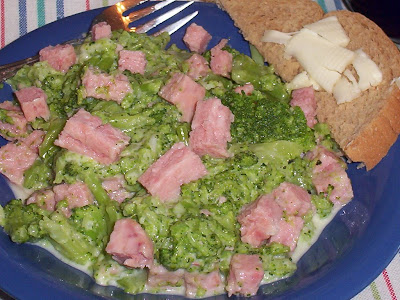 I remember way back to my 17th Christmas. I came down with chicken pox on Christmas day. I missed my Aunt Gladis' broccoli and rice casserole--the dish I loved the most. They saved some for me, along with her world's best chocolate cake. That is the first food I ate after I was able to eat again. It still means comfort to me.

When my boys were little, I had to cover almost all vegetables with cheese sauce to get them eaten. No bother, I loved them the same way. I recall my two year old Pearson chanting for "broccy cheese" at the buffet we used to frequent. Good times.

This dish is embarrassingly easy--too simple even to put in the e-book, but it tastes just like my aunt's casserole. I just steam/boiled the frozen broccoli. Drained it and added some white American/Swiss cheese slices. They melt completely and don't need to have other ingredients added in, so that is a super simple step. Then, I just opened a can of "luncheon loaf" from Aldi...Spam by any other description. Don't razz me too much. It lists 0 carbs, but I'm assuming there are some carbs there. Not too many, though. It is worth it for the convenience of a pantry stable meat for an E.Z. Fix meal. I just added that in for us, and dinner was served.

Well, not quite. I made a pot of rice for my boy. One pot will last him several meals. I will just bag the cooked rice up in individual bags. Those, I can pull out when he needs a rice base for our meats and sauces. No extra work on my part. For us, I added just half a slice of Braum's Carbwatch bread. It is still carby, about net 6 1/2 carbs per slice, so we only ate half a slice each. It is a nice ingredient for those who can do some gluten and some grain. After all, this is a forever way of eating for us, and the occasional bread makes it feel less like a diet. The Braum's bread is reduced in price once in a while to just a bit over a dollar per loaf. My mom spots it and brings it by from time to time. It is also the best choice for the son who carb balances his meals rather than strictly cutting carbs. Of course, he is away at school now.

I add another class to my schedule tomorrow, so it will be a crockpot night for sure.

Posted by Lisa Marshall at 6:45 PM

Email ThisBlogThis!Share to TwitterShare to FacebookShare to Pinterest
Labels: ham