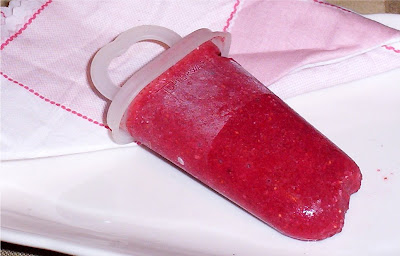 This is so good when it is hot outside! And so good with an added nutritional bonus too! Yesterday, I made a batch of In a Jam Muffins. Rather than topping them with commercial sugar free jam, I used some strawberries I had that needed to be used quickly. I chose all the soft berries from the container, probably about 10 berries. Sorry, I didn't count. I threw those into my bullet blender along with a tablespoon of chia seeds, some sweetener and some water. They pulverized nicely, and were quite liquidy until the chia set to work. After about twenty minutes, they were the consistency of pudding. I spooned those into the center of the muffin batter, then had enough left to top the muffins too. Those were quite good, much like strawberry french toast.

When my oldest son had his lip problems, one of his sweet girl friends brought him over a care package of "fat lip friendly" treats. Among them were some fruit pops sweetened with Splenda. I tried one, and it was so yummy I wanted to duplicate it with lower carbs. Having success with the strawberry slurry, I was inspired. I had a few more strawberries, so I repeated the procedure, replacing half the water with cream. After letting that set, I added a touch of sweetener to taste. Then, it was into the popsicle forms--the ancient ones from Tupperware. I let it freeze almost 24 hours. Tonight I am enjoying a delicious frozen treat. These taste just like real strawberries and cream. They are not rock hard like the usual home made popsicle. I am not totally sure of the proportions, but this is close. I'll try to duplicate the recipe when I get some more berries.

Combine all ingredients and blend well. Let the mixture set for 20 minutes to gel. Pour into popsicle molds and freeze until firm. Let rest at room temperature about 5 minutes before removing from mold and eating. Depending on the size of your molds, this would make 2-4 pops.

These really don't seem to be too drippy, but I added one of my new home made cloth napkins just in case. If you are inspired to save a bit of money, these family style napkins are too easy to make. I have pinking shears, so I don't even hem mine. I have two styles. One is a bandana, cut into fourths. Easy, and at most a quarter a piece. The other method involves buying bargain table fabric. My Walmart, though not all have fabric departments, has a great selection for $1.50 a yard. I buy ten inches, then cut that strip into fourths. The napkin in the photo is made from bargain table cloth. Can't beat the price, and they don't take up enough room in the laundry to be a bother. I keep all my cloth napkins in a cute ceramic flower pot in the center of the kitchen table. That makes them handy to grab with dinner.

Today was an easy cooking day because everything was prepped beforehand. Breakfast was the In a Jam Muffins, lunch was leftover Chili Cheese Under Pressure, and dinner was a Sloppy Tom Casserole. I spent the afternoon fiddling around with my new stone that fits in the toaster oven. With a couple of batches of Almond Thins already produced, I still don't have a winning recipe to share. No problem, we can still eat the trials which aren't quite right. I'll share my results when I have an undeniable success. Until then, try a popsicle.