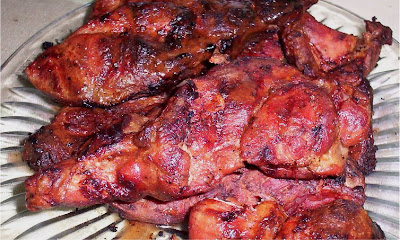 Sunday is my prep day. Today we tried something different for a "Triple Play" choice--cooking more than one meal's meats on the grill. We don't have a big fancy gas grill; we use just a portable charcoal variety. Today it made enough food for lunch today, another later this week, plus six pounds of pork country style ribs.

Often ribs cooked on the grill are really tough. If you want to avoid a wrestling match trying to eat them, you can tenderize the meat with slow cooking, or partially cooking before grilling. I chose the latter, and used my pressure cooker to do the job. The result is tender ribs that still have all the smokey goodness of the grill.

Now we are saving money by getting more out of the charcoal. We also have a couple of extra meals ready to go for later in the week. I just have to keep the men in the house out of the ribs and extra hamburgers until then. The sample bites we took were great.

Posted by Lisa Marshall at 1:59 PM