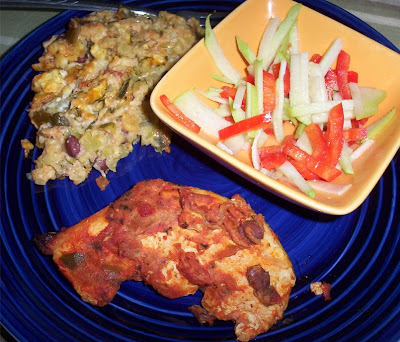 It is amazing. Just think of all the different ways a squash can be served for dinner! Tonight, we have two kinds of summer squash, zucchini and yellow crookneck, and a lesser known cousin, the Chayote squash. So summery and good, and prepared three different ways in tonight's dinner. Versatility.

The meat entree was a breeze. The menu called for Salsa Dancing Chicken, a family favorite. Being a "Multiply Meal" it was ready and waiting in the freezer. Because my sons aren't quite as devoted to the squash as I am, tonight's casserole is designed to hide the fact that the main ingredients are summer squash. To do this, I finely diced the squash in my old salsa maker--no telltale round slices to give it away. To this, I added some garlic and onion powder, 1/4 cup of black bean salsa, 3 tablespoons of leftover onion dip and about 3/4's cup of Jack cheese. I stirred it all together and baked it in a casserole dish next to the still frozen chicken. They were done at the same time. Easy. Not an award winning recipe, but a good way to hide the squashy texture for picky kiddos.

For the grown up taste, I made a simple, super fresh tasting salad. Last week red bell peppers were only 69 cents each. For this dinner, I sliced half of one into matchsticks. To contrast with the pepper, I added matchsticks cut from 1/4 of a chayote squash. It has a very mild flavor. Next I added a sprinkle of onion powder and a few squirts of lime juice. A tiny drizzle of evoo, and then set it aside for the flavors to absorb. 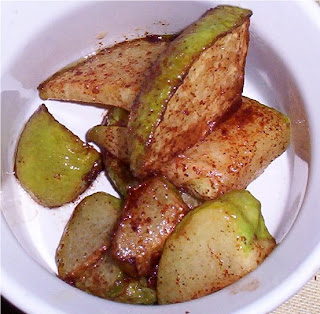 I read on several sites and blogs about cooking Chayote squash to taste like fried apples. After reading too many recipes to remember, I wandered into the kitchen and did my own thing. First, I cut the remaining squash into bite sized chunks. I did not peel it, although some recipes say to do so. I simply dumped those into a non stick skillet with a tablespoon of butter. I heated those together until the squash began to become tender. I then added pumpkin pie spice and extra cinnamon. I topped it off with a few drops of liquid sucralose, or the equivalent of about 2-3 tablespoons of sweetener. I tasted the chayote then, and it was wonderful. Because I did happen to have some apple flavored drink mix, I added a sprinkle at the end. The texture and taste is amazingly simlilar to cooked apples. Hubby absolutely loved it. Number three son didn't care for them, but neither does he like apple pie. Over all, it was a very good dinner, and little time in the kitchen for mom. That's the way I like it.