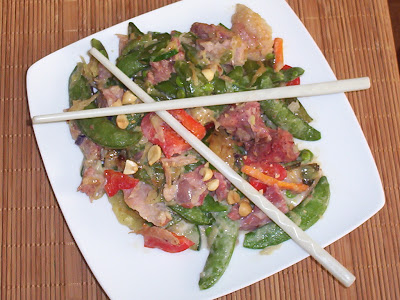 I planned for Waikiki Stirfry as my third meal of the Triple Play meals this week. But, as life often goes, things got messy, and I found I was out of pineapple DaVinci syrup. I planned on picking up some pineapple flavoring at the grocery store, but none could be found...even at two stores. So I changed up some ingredients and made a brand new dish. Still very "islandy"--is that a word? Who cares.

I did have some Kahlua flavored syrup. I did have some coconut milk. The beginnings of inspiration. I threw various veggies in the skillet--you can put in whatever you have. This time, I added about 3/4 a pound of frozen snow peas, 1 cup of coleslaw mix, 1/4 zucchini, and some red bell pepper. Once they got going, I mixed half a can of coconut milk, about 1/4 cup DaVinci Kahlua syrup, 1/2 teaspoon of ground ginger and a half teaspoon of xanthan gum. I whirled this around in the bullet blender to really mix in that thickener. Next, I added the already cooked and chopped ham to the veggies. Once that was hot, I stirred in the coconut milk mixture and let it thicken up for a minute or so. I served it up and sprinkled some chopped peanuts on the top for crunch.

The boys sneared at it as "Chinese" food. They don't share my passion for snow peas. I think it is wonderful. We'll see if John likes it. It is packed in his lunch bag. I am eating mine for brunch. Once it was cooked, it smelled too good to pass up. The Breakfast Bonanza muffins I microwaved can be my snack later! Flexibility can be the mother of invention too, I guess. Aloha!